The Booth Boys are a group of Attraction Animatronics in The Twisted Carnival. they are part of the Whack-a-Boy game. They both resemble the versions of BB and JJ from Fnaf 2.

The Booth Boys resemble smaller versions of BB and JJ from FNaF 2 with having stubby legs and arms with buttons, a propeller hat, rosy cheeks, a big smile, and a shirt and overalls. The red Booth Boy has the colors of red and white for his hat and clothes with having blue eyes, the blue Booth Girl uses blue and white for her hat while using blue and purple for her clothes and having magenta eyes they also have the same colors of the bb in fnaf 3s minigames.

So far,The Booth Boys have been seen in their respected minigame, Whack-a-Boy, and on the camera for the Storage Shed.

An ingame screenshot featuring the Booth Boy's icon for entering the Whack-a-Boy minigame. 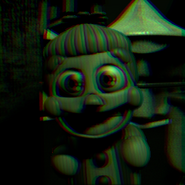 A frame of the purple Booth Boy out of the hole.

The animation of the purple Booth Boy popping out of the hole and going back in.

A frame of the purple Booth Boy when hit by the hammer.

The animation the purple of Booth Boy getting hit.

A frame of the red Booth Boy when hit by the hammer.

The frames of animation for when Booth Boy emerges and then goes back into the hole.

The frames of the red Booth Boy getting hit by the hammer.

A joke render of a Booth Boy being carried by balloons. 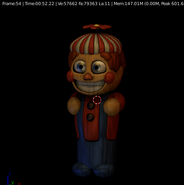 A render of the Booth Boy as seen in Blender.

Both of the variants of the Booth Boys with the hammer in Blender.
Add a photo to this gallery
Retrieved from "https://the-twisted-carnival.fandom.com/wiki/Booth_Boys?oldid=2720"
Community content is available under CC-BY-SA unless otherwise noted.