Unknown
Carnival King is one of the major attraction animatronics in The Twisted Carnival.

Carnival King is a metallic statue that resembles a king. It sort of resembles Prize King from Freddy Fazbear's Pizzeria Simulator. The color on him is mainly focused of yellow, black, and red. Like pops his arms and legs look like metal pipes with gloves and shoes on. His right hand and shoe are black, while his left glove and shoe are red. Carnival King has a creepy smile on his face and has two different colored eyebrows. The left brow is black, while the right brow is red. Carnival King also wears a crown.

So far he has been seen to appear next to the Ferris Wheel.

Carnival King seen on a beta camera image on the ticket booth's computer. 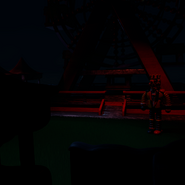 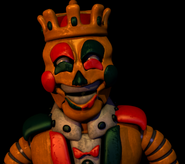 An image of Carnival King's upper half.

An early ingame screenshot of the minigame with Carnival King.

Ditto, but with a more updated model. 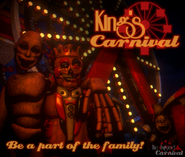 Carnival king featured on the advertisement for Jollibee's. 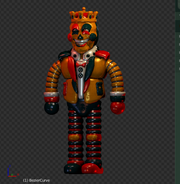 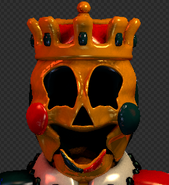 A non-canon render of Carnival King. 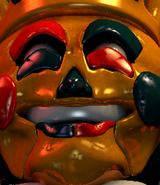 A joke render of Carnival King.
Community content is available under CC-BY-SA unless otherwise noted.