Chicsy is an animatronic chicken that resembles Chica. She is decayed leaving decay marks on her mask, and instead of hands she has pom poms in which she is missing the left one. Her bib does not have anything on it, except for some stars. Her bib is torn up as well, along with some blue shorts.

So far Chicsy is known to appear in front of the ticket booth and appear near the Whack-a-Boy stand.

Chicsy with Bonzo and Bearhug on the game's second teaser.

Chicsy with Bonzo on the game's third teaser. 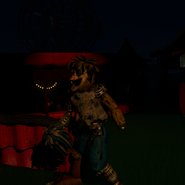 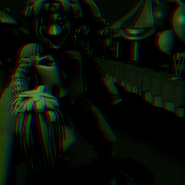 Chicsy by the Vending Machines.

A render of Chicsy in front of the Ticket Booth.

Chicsy in front of the Ticket Booth.

A purchasable Chicsy plush seen as an item in the Prize Place. 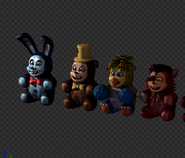 A Chicsy plush along with the others in blender. 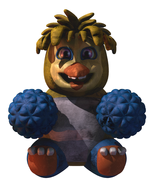 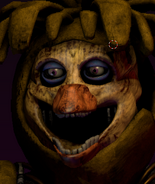 A close-up of Chicsy's face in blender.

A frame of Chicsy's jumpscare.

A creepy render of Chicsy looking at the player.

Add a photo to this gallery
Retrieved from "https://the-twisted-carnival.fandom.com/wiki/Chicsy?oldid=2721"
Community content is available under CC-BY-SA unless otherwise noted.