Looking for the minigame?

The Dunk Tank is a location part of King's Carnival.

The dunk tank is where dunko appears.There is 2 fences with each of them having balloons there is a dunk tank in the middle and behind it are some tents, It is also the third camera 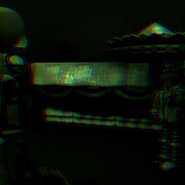 The place on the camera with Carnival King seen in it.
Add a photo to this gallery
Retrieved from "https://the-twisted-carnival.fandom.com/wiki/Dunk_Tank_(location)?oldid=2795"
Community content is available under CC-BY-SA unless otherwise noted.