Dunko is an animatronic and acts as a minor attraction in The Twisted Carnival.

Dunko is an animatronic that's exclusive to a water dunk type of minigame. He appears to be a green animatronic with bunny like ears, purple shoes, two purple buttons, and is wearing a puppet mask. He also has a target on his left hand.

The separate texture for Dunko on top of the dunk tank reaching.

Ditto, but as a joke render.

Dunko as seen in the minigames. 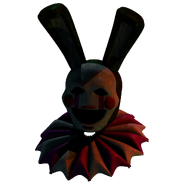 A creepy render of Dunko's emoji from discord. 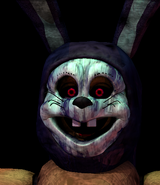 An early version of Dunko.

A joke image of Dunko infront of the Ticket Booth.

A render of Dunko in blender.

The game's banner on Easter Fools'.

Dunko in a joke "The End?" screen.

Add a photo to this gallery
Retrieved from "https://the-twisted-carnival.fandom.com/wiki/Dunko?oldid=2789"
Community content is available under CC-BY-SA unless otherwise noted.